Please join to support those who are a part of this honorable profession. 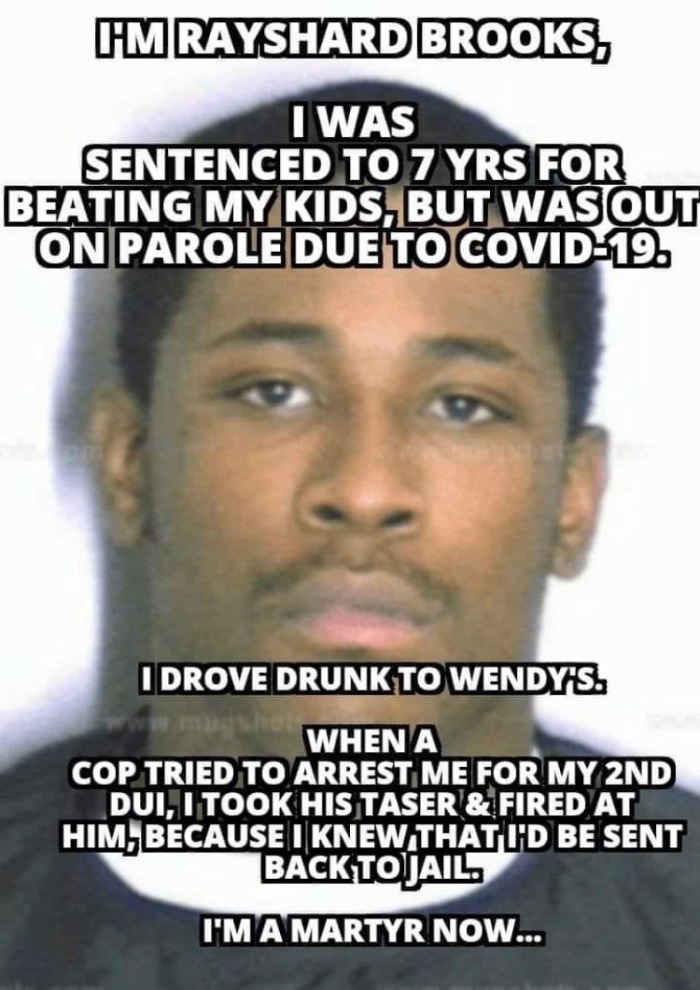 The man who cost a cop hid job and Wendy’s too but in Atlanta. He is a criminal. He is fighting with the police. Stealing taser and turning to shoot a cop.

Wendy’s called the cops. He fell asleep in the drive-through window lane. He was holding up the entire line. He was passed out drunk. He failed sobriety tests and didn’t want to go back to jail. This is such a screwed up world. The cop did his job. I guess they should have let him get away with the taser do he could come back and drive drunk, possibly killing others. THEN THE QUESTION WOULD HAVE BEEN ”why didn’t the cops arrest him and get him off the toad when they had the opportunity earlier?” No win situation for cops.

Never apologize for being white explained

Oh, say, can you see, by the dawn’s early light,
What so proudly we hail’d at the twilight’s last gleaming?
Whose broad stripes and bright stars, thro’ the perilous fight,
O’er the ramparts we watch’d, were so gallantly streaming?
And the rockets’ red glare, the bombs bursting in air,
Gave proof thro’ the night that our flag was still there.
O say, does that star-spangled banner yet wave
O’er the land of the free and the home of the brave?

On the shore dimly seen thro’ the mists of the deep,
Where the foe’s haughty host in dread silence reposes,
What is that which the breeze, o’er the towering steep,
As it fitfully blows, half conceals, half discloses?
Now it catches the gleam of the morning’s first beam,
In full glory reflected, now shines on the stream:
‘Tis the star-spangled banner: O, long may it wave
O’er the land of the free and the home of the brave!

And where is that band who so vauntingly swore
That the havoc of war and the battle’s confusion
A home and a country should leave us no more?
Their blood has wash’d out their foul footsteps’ pollution.
No refuge could save the hireling and slave
From the terror of flight or the gloom of the grave:
And the star-spangled banner in triumph doth wave
O’er the land of the free and the home of the brave.

O, thus be it ever when freemen shall stand,
Between their lov’d homes and the war’s desolation;
Blest with vict’ry and peace, may the heav’n-rescued land
Praise the Pow’r that hath made and preserv’d us a nation!
Then conquer we must, when our cause is just,
And this be our motto: “In God is our trust”
And the star-spangled banner in triumph shall wave
O’er the land of the free and the home of the brave!

Everyone has a bad day. Robert Watts, the main character, is having a horrible day. Robert finds himself a single parent with absolutely nothing. No job, house, wife, or money.

Is the saying if one door closes, another opens true? Hopefully, it is valid for Robert’s sake. Robert has no choice but to take action on the offer a stranger brings him. Robert must take care of an aunt Ruth. An aunt Robert never knew existed. Aunt Ruth is elderly and in poor health. Robert and his daughter must move into the Harlop Estate to live in and care for Aunt Ruth. When Ruth dies, he gets everything. This is not Robert’s choice, but it is the only option left.

Robert’s duties are full caretaker duties. Robert and his daughter are living in an old mansion that has not

witnessed upkeep in a long time. On top of all these strange things happen. Robert and his daughter Amy realize Ruth is not the only one in this house.

Shallow Graves is a found treasure. I love it. The plot is unique with well-defined characters.

This as an intense page-turner. I’m looking forward to.future books on this series. People are buried 6 feet under for a reason.